"Emperor Grand Marriage" static infographic        In the palace, the big wedding is a grand ceremony, and the procedure is cumbersome and complicated. Only when there is 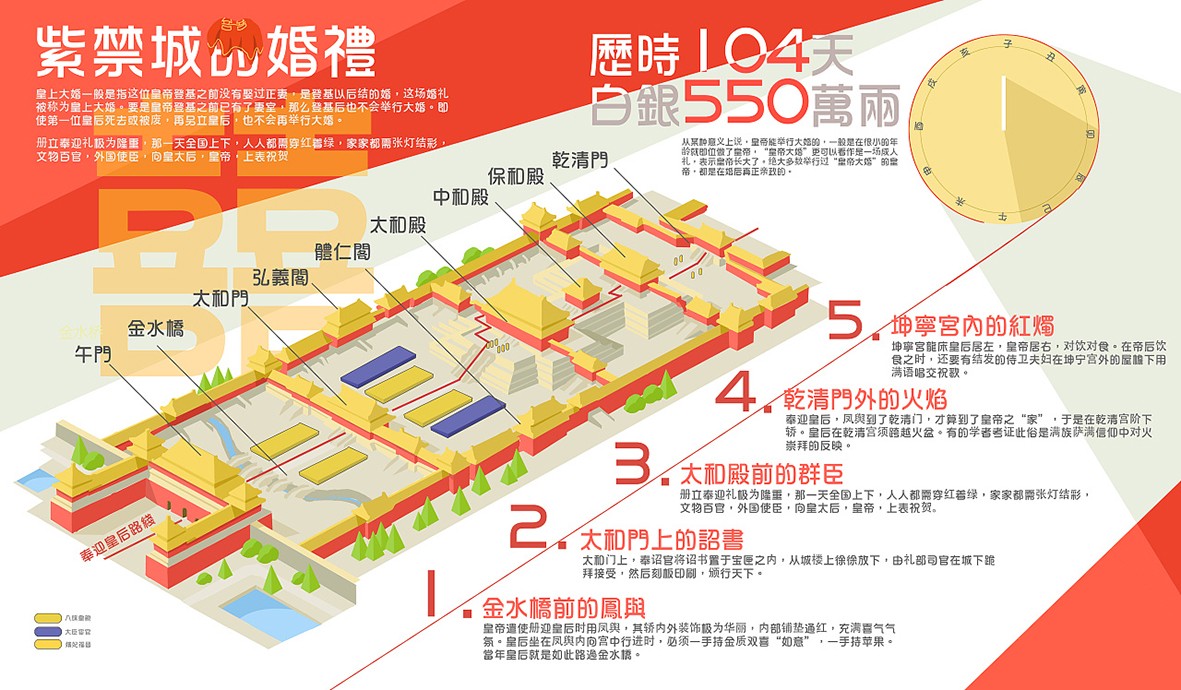 In the palace, the big wedding is a grand ceremony, and the procedure is cumbersome and complicated. Only when there is no emperor who married his wife before the throne, can a big marriage be held. The wedding of Emperor Shenzong Zhu Xi's Queen Wang Xijie spent more than 90,000 silver on the cost of weaving.

According to the Book of Rites, marriage between men and women is subject to six rituals, namely, “Nai Cai, Wen Ming, Naji, Na Zheng, Announcement, and Pro-Welcome”. When it comes to marriage, the emperor is just like the ordinary people, but the ceremony is more grand.

The so-called Nacai, that is, the marriage, the man asked the matchmaker to go to the pro. In ancient customs, the matchmakers wanted to take a geese to meet. The emperor raised his relatives, naturally he would not only take one geese, but prepared a thick gift. When the woman receives the gift, it means agreeing to the marriage, and the two parties can further discuss the marriage. Ask the name, that is, ask the woman's name and date of birth. After the woman promises to marry, the man must take the initiative to send the Geng book with the name of the man and the date of birth (that is, the birth of the character) to the woman's house, and ask for the woman's book. Also, please ask the fortune teller to calculate whether the life phase is appropriate and appropriate to be a pro.

Najib is engaged. Once the fortune teller said that the two sides "eight characters" match, the man officially prepares the gift, and asks the matchmaker to bring the letter of appointment to the woman's house to propose marriage. The woman accepted the gift, even if she agreed to the marriage. At the same time, the woman must reply to the letter of appointment as a certificate.

Please ask, that is, negotiate the wedding period. The man first asks the person to choose the date, then writes the "request", asks the matchmaker to give the woman, and asks the woman's opinion on the wedding date. If the woman has no objection, the two sides will begin to discuss matters related to the marriage.

Welcome, that is, to marry the bride. It is also the last of the six gifts.

Royal etiquette must be drafted and executed by the Ministry of Rites. From the beginning of Naxi and the name of the name, the officials of the Ministry of Rites were busy. A series of ceremonies must be completed in the dry house, and gifts for the woman must be publicly displayed. When it was time for the Kyrgyzstan, the emperor first accepted the pilgrimage of the Baiguan, and then sent two messengers to the future Guozhang’s home to read the script with the honor guard and the drum band.

After a series of cumbersome etiquette ended, finally arrived on the pro-welcome day, the mood of everyone in the palace and the local bureaucrats reached a climax.

After the team is welcome to arrive at the National Palace, they are not in a hurry to pick up the bride. On the contrary, Jin Yiwei's carrier brought the emperor's ceremony and Longting to the front yard and changed the eunuch to the embroidered building in the backyard. Stop in the specified direction. The bride put on the empress dress, wearing Feng Guanxia, accepting the Queen's gold book and Jinbao, and then returning to the embroidery building to wait for the custard.

When Ji Shi arrived, the bride boarded the ceremony and welcomed the team into Tiananmen Square. From the door in the middle of the noon door, enter the Forbidden City and reach the Qingmen. The bride entered the Kunning Palace under the guidance and gave the house a big gift.

The emperor's cave room is also dominated by red: the door is decorated with red words and couplets, hundreds of books are hung on the bed, and the bed is covered with hundreds of quilts. There is also a big red embroidered dragon and Phoenix Double Happiness account on the bed. After entering the cave, the emperor and the queen must first worship the heavens and ancestors, and then go to the ceremony, that is, drink a glass of wine. It is said that this process is very complicated. The bride first had a drink and handed it to the groom. The groom took a sip and gave it to the bride. The bride sipped it. Then the groom took a glass of wine to the bride; the bride took a sip and gave it to the groom, who drank it.

Advocate and practitioner of the whole process of Chinese wedding customs and travel projects.

We only do marriage and love (love), marriage customs, weddings, wedding and cultural travel projects, and projects that are not related to "marriage", do not consult us!